After my mother died we put my father in a home.

Funny how that sounds like a confession! It sounds like abandonment, like kids who don’t care and don’t want to be bothered with a dotty, demanding old man.

In fact it was the best we could do for him. The home – actually two houses on adjoining suburban lots – was a little shabby, but the lawn was green and mowed smooth enough for walkers and wheelchairs, and the tree between the houses was huge, with comfortable chairs set out in the shade. The caregivers were kind. The food was delicious and plentiful. It didn’t feel like an institution, but it was safe, staffed by people who understood how to care for people with his condition.

He had a little room to himself that opened out onto a grassy area. Outside the sliding glass door we put potted plants that used to stand on their stoep – his and Marmeee’s – and a small clay garden gnome that my sister the Kat had given them. The room itself was very small, but we made it big with the framed photographs from their trips to America, and the life-size photograph of the first (and last) trout Marmeee ever fished for, the intensely colorful blanket she had crocheted on the bed, a few books that we hoped he might still be able to read. You know … the random odds and ends that one hopes, against all odds, will make a place home. 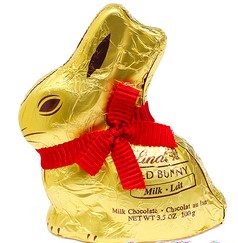 Oh, and a chocolate Easter bunny. That was a housewarming gift from me; of all his children, I’m the one who has inherited his chocaholic genes in their most potent form. He loved plain chocolate with licorice shoelaces, and as a child I gave him some in a brown paper bag every birthday – and then demanded my share, which he would eke out with a stingy hand. You haven’t been able to get licorice shoelaces for years, but he was happy with chocolate on its own – always plain; he didn’t want any potential chocolate space in the slab taken up by nuts or raisins or other junk.

But that was for everyday munching. Everyone knows Easter chocolate is better – a special treat, guaranteed to make any situation more bearable! (Actually, in the US Easter chocolate mostly sucks. But this was in South Africa, and anyway it was a Lindt bunny.)

I put it right next to his bed where he couldn’t miss it, and imagined him nibbling on it on his first night in his new bed. But when I visited him the next day it was still there, untouched.

I picked it up and brandished it at him. “Oy! You didn’t eat your bunny!” I said.

He blinked at it bemusedly. “Is that mine?”

He looked down at the bed he was sitting on (there was space for only one chair in his room) and fingered the crocheted blanket. “Oh! Is this my bed? This looks like the blanket Mom made.”

“Yes, Dad,” I replied gently. “This is your bed. You live here now. And this -” I brandished the bunny at him – “is your own chocolate Easter bunny! You must eat it before it gets old and yucky.”

“It’s an Easter bunny? Well, when is Easter then?” he asked.

“It was a few weeks ago. Never mind about Easter – we’ve already celebrated that. But the store had a bunch of leftover chocolate bunnies on special so I got you one.”

He took it, stroked the ribbon with his forefinger. Said, “I think I’d better save this for Easter. It’s so pretty… It wouldn’t be right to eat it on an ordinary day.”

The next time I visited I took a slab of plain Cadbury milk chocolate, which I put into the top drawer of his bedside table, where he had no difficulty finding it. The bunny was still there … and it was still there a week later when I went to say goodbye before flying back home to Washington. I wonder whether he ever ate it? I like to think that someone eventually slipped off the red ribbon, peeled away the gold paper, and shared it with him. I like to think the taste of good chocolate melting on his tongue brought him a moment of simple pleasure.

But if my sister the Egg found it when she went to clear out his room, and either ate it or gave it away … well, that’s okay too. At least it didn’t sit there long enough to get stale.

23 thoughts on “The Olde Buzzard and the Easter bunny”