Where do I begin? With the Tunnel I’ve avoided for half a century? Or with the Black Dog that bites my ankles and drives me toward it?

I begin today. I choose to walk into the dark with the dog at my heels. 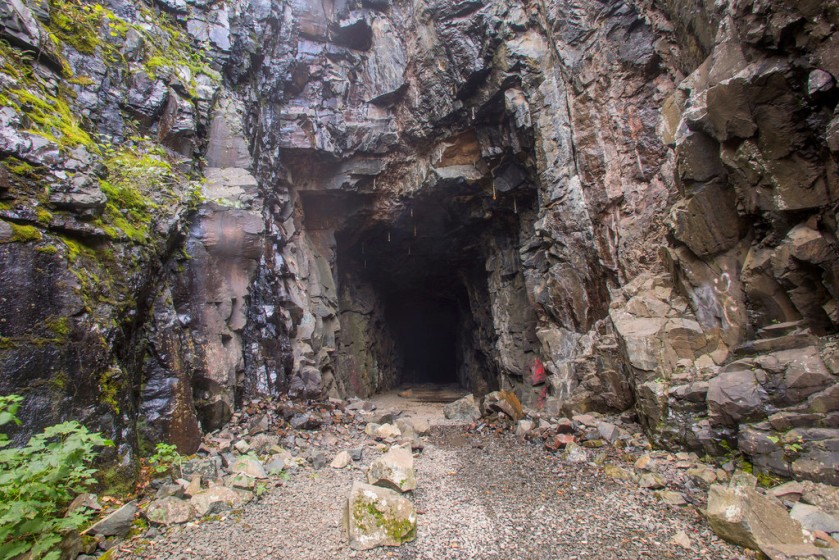 In February I turned sixty. In three days time I will be sixty-and-a-half. It’s time to figure out what to be when I grow up.

Hah – that’s a cute start to a blog post, right? A little zing, a perky finger to convention, a zap of wry, dry, slyly self-denigrating humor. But, unfortunately, not true.

I know what I want to be – I always have. I even know how to get there. What I don’t know – what I haven’t figured out in forty years, five months and twenty-eight days of trying (the first twenty years it didn’t occur to me “trying” was involved; I still believed in the magical inevitability of I Am) – is how the fuck to make myself keep walking all the way to the destination. (I even know there is no destination, only an unmarked trail through the dark, but I must take it or go nowhere.)

So. Sixty years old. Three-quarters of my life. (Yes, I know it might be only two-thirds, and it may also be sixty sixty-oneths – but three quarters of my grandparents and all my parents made it to their eighties, so that seems a reasonable number to shoot for. Assuming I don’t absent-mindedly shoot myself before I get there.) I spent the first quarter daughtering, the second quarter mothering, the third quarter wifing. Now what?

To be clear, while the daughtering has ended and the mothering is only occasional, the wifing continues. The Hubbit and I ignored our twentieth wedding anniversary a little over a week ago. Random factoid set: Traditionally – insofar as something started less than a century ago can be deemed traditional – in the UK and the US the twentieth is the “china” anniversary. For reasons I haven’t bothered to research, the Chicago Public Library designates it the platinum anniversary. Flowers and jewels are also mentioned.  (I love Wikipedia, don’t you?) So, if we’d been a traditional couple, even marginally romantically inclined, the Hubbit could have escorted me to the antique mall or the art show to buy a big china mixing bowl to replace the one he broke a few years ago and that I still miss every time I have to make do with the greasy-smooth plastic one, or he could have showered me with asters or bedecked me with emeralds. In return, I could have given him pretty much anything from this store, since one of the first things he ever told me about his personal life philosophy (and in twenty years I’ve never seen him stray from it) is that it’s impossible to own too many tools.

What I asked for – in our/my own style of non-traditional romanticity – was that he repair the motor on the boat so that we could once again float down the Columbia, I nude but for a book and he sternly watching our dangling fishing lines. (He used to threaten to pull my line out of the water if I didn’t learn to take the fish off the hook myself, until he realized I was there to be naked in the middle of the river and really didn’t care about the catching part of fishing). I wanted to remember what it was that made me want to live here, so far from Africa. You see, I fell in love with the man first … but it was the river that sealed the deal. We don’t have rivers like the Columbia in Africa.

In any case, I would have settled for a conclusive repair to the septic pump. In return, I promised to clean the house. Neither of us delivered, and in the end it was easier to pretend twenty wasn’t a big deal. Twenty-five years, now – that’s a quarter century. That’s silver. Surely he can get both the boat and the septic fixed, and I can get the house clean, within the next five years.

To get back to my original point: in the context of a lifetime, looking at one more (potential) twenty year stretch, I find myself thinking … this one’s for me.

I started pondering this post a few days ago. (I should have written it then, before brain fog descended, muddling my thoughts and tangling my fingers.) I started writing it early today. (I should have finished it right away, before the dark began to suck me into itself.) Now I’m finding it increasingly difficult to write coherently. Tears dam up behind my cheeks, and the pressure of holding them back makes my face ache. When I look back, trying to make sense of how I got to this place, I see word soup. Fragmented ideas, fractured phrases. They drift just out of reach.

When I read this post again, I will hate it. I will be compelled to edit it. But I will write it anyway, I will say what I have to say as simply and clearly as possible, and I will post it without delay even though I can’t remember why I must, or whom it’s for. It is my yawp.

This is what I have done: I have stopped the drugs. Prozac, Bupropion – it’s been nice to know I could put a leash on the Black Dog, but I want to see what happens if I let it run. Will it turn and devour me? Or will it go fetch – and if so, what will it bring me? And Adderall – it was such a relief to have a diagnosis, an official Label, to paste over a lifetime’s worth of fumbles and failures. Such a victory to think more clearly, to say I would do something and then actually do it.

We – my doctor and I – juggled the drugs until I got to a place where I could actually tell when I was fucking up. Sometimes that made it possible to not fuck up, but even when it didn’t, the experience of actually seeing what my brain was doing was revelatory.

Until it wasn’t. I still create to-do lists, which I edit and organize and reorganize compulsively, in between staring at the wall and playing sudoku – which is what I’d much rather be doing right now, by the way – mindlessly organizing numbers rather than trying to organize my own thoughts into a coherent … what the fuck is this? Explanation? Description? Record? Take a deep breath. What am I doing? I’m trying to write – no, I am writing about where the first six months of the next, maybe last, maybe twenty years of my life have brought me: to the mouth of the Tunnel, to the lair of the Black Dog.

Here, I think, are my options. I can go back to the doctor and have her increase the dose, or change the prescription, or … whatever occurs to her. If I do that, I’ll feel better. The Tunnel will disappear in a puff of fairy dust, and the Black Dog will curl up at my feet like any old Labrador.

How will I grow up if I never walk through the Tunnel? What can I be if I don’t learn to run with the Black Dog?

So. I have quit the drugs. The next step, which will take me in through the tunnel mouth, is to quit eating.

No, not permanently, for fuck’s sake – I’m not committing suicide. I’m fasting. I don’t know how long for … five days? Forty? As long as I can. I have to go through the hungry and find the burn and then get hungry again, and after that I will eat.

As for the reasons … I was going to write about those but you have Google – they have to do with energy, and ketosis, and autophagy, and cleansing my body of all the toxic crap that (I suspect, and who are you to say I’m wrong?) is off-gassing into my meat my bones my brain.

I remember now why I had to write this. It’s because this is going to suck, mainly for me but also for anyone near me. I may not be a lot of fun to have around. I may have to stop talking. I may not be able to listen. I may not be entirely reliable. I may have to hide under a blanket, or in the closet with the light off. Girl Child and Twiglet, Ngalitjeng, Wonder Woman, Kuja, Parri, and of course my own Hubbit: I have to make this journey, and I don’t know how long it will take, and you can’t come with me and I can’t talk to you about it – except, perhaps, here, where I talk to anyone in the world who happens by.

Don’t call me back. I have to find out who I can be. And if you see the Black Dog with my heart between its teeth, that’s okay. You know I’m good with dogs.

17 thoughts on “At the tunnel mouth, waiting for the Black Dog”