I lost a friend today because I was late. Well, maybe not a friend … but someone I liked, who I’d thought liked me, blew up in my face to lasting effect because I kept her waiting fifteen minutes.

The incident hurt surprisingly much.

In the greater context of this year’s overall shittitude it was a small thing. This wasn’t a key relationship, and while it’s possible that she’s been pretending to like me while nursing a growing grudge, it’s more likely that she was just having a bad day and I made a convenient target.

It hurts that she had a valid complaint that I seem powerless to address. I am always late, and no matter how carefully I plan, how early I set my alarm, how fast I drive from here to there, after a lifetime of trying the best I can do is damage control. When I know punctuality is especially important to someone I can usually, with considerable effort and anxiety, keep my lateness within a ten minute margin, which most seem to accept provided I call when on my way to tell them how late I’m going to be, and am sufficiently apologetic when I arrive. Everyone else is best advised to bring a book – or, if waiting annoys you, start without me – I won’t care. I wouldn’t have cared today when my formerly-friendly acquaintance canceled our arrangement. What hurt wasn’t that she got on with her day; it was the ugly and unexpected intensity of her anger, and my powerlessness to answer it.

I won’t defend a bad habit. Instead, here’s some perspective for the benefit of the model clock-watchers out there, and in particular those whose sanity is challenged by us tardies. (I know I’m not alone.)

First, we know our perpetual lateness is annoying – but as annoying as it is to you, it’s embarrassing and frustrating uto us. You see it as rudeness and lack of consideration; we see it as weakness, a defect, a failure to do something everyone else finds easy. We read books and make lists and watch TED Talks, but it’s like dancing: some people have rhythm; others, no matter how religiously they chant the “one-two-three one-two-three one-two-three” of daily life, cannot keep in step with the minute hand. For you it’s easy – you plan your day, you look at your planner, you know how time and distance and traffic fit together, and everything glides so smoothly into place you simply can’t understand how we manage to trip and stumble every damn time.

Well, allow me to enlighten you. Basically, this happens.

I’ve been thinking about it, and I’ve concluded that I and people like me have hooked a heel on a loose thread in the fabric of the space-time continuum. We, too, plan our days and check our planners. We can figure out how long it will take to get from here to there, and what the time should be when we leave. We understand the different kinds of “leaving” – the kind that involves stopping what we’re doing, and the kind that involves actually driving through the gate. We know to add five or ten minutes for bumps in the road, and what we have to do before we go, and how long it will take to get our shit together. We figure all that out and then we start our day, and that old minute hand goes ambling around in its lazy circles, and some of the things on our to-do list get done and some don’t. And then our electronic planner twitters a warning … and at that exact moment a quantum cowboy blips into being, lassos our deadline, and vanishes with a resounding fart and a clatter of hooves through the black hole inside the clock on our smart phone – which at that moment typically shows five minutes to our scheduled time of arrival.

Arriving presents its own challenges. Quite often, this happens…

I’d like to say my new year’s resolution for 2019 is to be on time, but I already have a full tureen of bubbling resolutions to toil and trouble over before the Hubbit comes home. And while it turns out that I have two months longer than I thought I did – because he’ll likely be in rehab until well into March – that doesn’t necessarily mean anything in terms of getting from where I am now to … anywhere at all. Time and space are tricksy devils, whether you count with a clock or a calendar.

Yeah, well … seriously, Yoda, you need to shut the fuck up. Go read a book or something. And if you don’t know by now that there’s more to me than one bad habit, and that I’m worth waiting for, then … yeah. Better you leave without me.

Let’s talk. How do you relate to time, schedules and to-do lists? Whether you are a Tardy or a Timekeeper, how do you feel about the other kind of human? Do you ever secretly think Yoda is a self-righteous pain in the ass?

May was a busy month with little time for serious reading but, of course, I still managed to pick up some good ones. It seems I overloaded on sci-fi and fantasy this month! Everything I read and watched is, as always, reviewed here. (For last year’s reviews, go here.)

The best of the month’s movies were…

So what have you read or watched lately that’s worth sharing?

This month’s reading was completely out of control. I love, love, love books, and can’t imagine a life without them – but sometimes they’re like a drug, and reading becomes a compulsion – and a way to avoid “real life” – rather than an enriching way to spend leisure time. So for April I’m taking a sabbatical – but in the meantime, everything I have read this year is briefly reviewed on my Books, etc. page. (Go here for 2014’s reviews, dating back to last September.)

There were some real goodies among my March books, which I’d love to share:

And the best of the month’s movies were…

As always, I glommed down a bunch of books this month, and also watched quite a few movies. They’re all reviewed on my Books, etc. page. (I’ve been doing this since around September last year; go here for 2014’s reviews.)

I thought it would be good to give an extra mention to the ones I enjoyed most, so here goes:

And the best of the month’s movies were…

Hmm, not the most challenging month of reading, I must confess. No matter; I’m halfway through a wonderful book, and have a pile of promising reads next to my bed. February’s looking good!

You know that feeling you get directly after you leap from the penthouse suite of a really tall hotel? Well, okay, nor do I – I have zero experience of penthouses. But efforts to impress aside, I’m talking about that feeling you have as you’re plummeting gracefully toward the planet, and you wonder whether this was really what you wanted to do.

That’s how I feel right now – the plummeting part, that is; I haven’t quite got the hang of flying yet, but I will. Any minute now.

This particular leap of faith actually began about a week ago, when our annual lightning storm took out my laptop and left it disheveled, drunk and disorderly. I, being no stranger to CID (catastrophic interruption of deadline), very calmly went all to pieces, until it occurred to me that I should maybe contact the technological genius who rescued me the last time this happened, if only I could remember his name. As it happens, at the beginning of this year I quit doing that thing you do with your fingers to ward off the evil eye every time someone said “You need a smartphone”, and went out and got one. So I didn’t need to remember his name – all I needed to remember was how I might have described him. I typed “Geek” into my clever little Android and up he popped, in all his Transylvanian mysteriousness. (Well, I think it’s Transylvania. Somewhere in the Balkans, anyway. Of course, now he lives downtown in Smallville Eww Ess Aye, and he wears jeans and stained tee-shirts instead of a black cape – but he still speaks in strange tongues and performs arcane works of magic.)

To cut a long story short – mainly because I don’t know the words required to tell it in any detail – he took Ye Olde Laptoppe apart, sneered at its inferior Lenovoness, pronounced it not worth saving, and presented me with his old Dell Latitude, loaded for bear with the full Office Professional suite, and Windows 8.1.

Which brings me to the point of this story. The thing is, I am what marketers term a “slow adopter”.

And I am cool with that. In my world, blackberries are for eating, and wii is spelled with two Es (and never in polite company). I still remember pouring contempt upon the wild-eyed dreamer who tried to tell me I would ever need anything more than the 11MB on my first hard drive computer. Don’t get me wrong – I love science fiction, and I have no doubt that matter transmitters, antigravity and fat-dissolving chocolate are just sitting in a forgotten petri dish somewhere waiting to be discovered. But I don’t necessarily need to own the latest marvel of technology. (I mean I don’t need to own much of the stuff anyone has discovered so far. I do in fact rather urgently need either a matter transmitter or a time machine.) You can keep your Nook and your satellite TV and your Hybrid. As long as I have a good book, a tree to sit under, and a broomstick to get me where I need to be, I’m fine.

Except when techno-magic whomps me upside the head … oh man, that is a whole other story.

Enter 8.1, hot on the heels of my new smartphone. Scatter some fairy dust and show me The Wonder That Is Outlook. And I get it! I do! I can get my shit together! I can be organized! I can become someone who is on time, never forgets a bill, and has a pristine filing cabinet instead of a heap of cardboard boxes stuffed with unopened envelopes and bits of things that need to be fixed. I too can have an office that looks like this… 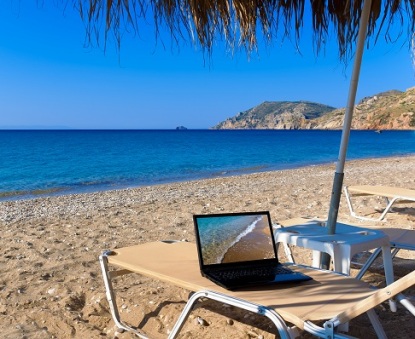 So, being a woman of action, I started Outlook up, patted it on the butt, and told it to get its little old self busy synchronizing my email accounts.

Three-and-a-half minutes later, Himself blasted into the study, demanding to know just what I was doing to consume an entire gigabyte of whatever it is that keeps us online and hurl us over our monthly limit. “Oops!” I said, and hastily turned off my computer – that being the only way I could think of to shut Outlook down. It turns out that when Outlook syncs one’s email accounts, it downloads the entire contents of said accounts onto one’s computer.

And you thought the mess on my desk looked bad.

Well, that’s when I did it. I jumped. I finally, once and for all, acknowledged that there was absolutely no way I was ever, ever, EVER going to answer all of those emails. Or file them. Or, in fact, do anything at all except pile more emails on top of them. And yes, there may have been treasures in there – love letters, even, for all I know – but they are gone, gone, GONE. I spotted a few folders that looked as though they had chunks of good stuff in them so I saved those, which brought me down to maybe 1000-or-so emails. I don’t know how many I dusted off into the space between pixels, but it was something between 10,000 and 25,000.

Who needs anti-gravity? I have thrown off my chain and I’m flying!